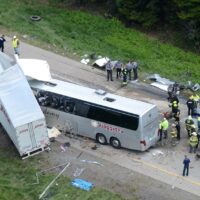 In July, the Transportation Department announced that it would be relaxing the federal regulations that require truckers to take breaks and pull over; rules that were mandated in an effort to reduce truck accidents due to driver fatigue. The results would lead to truckers working and driving even longer days, resulting in more fatigue and an increased number of fatal crashes involving large trucks. As a result, a number of highway safety advocates are concerned about the announcement.

The current rules limit truckers to 11 hours of driving within a 14-hour windows and mandate that they have to have 10 back-to-back hours off-duty. They must also take 30-minute breaks if they’re going to be driving for longer than eight hours. These hours are measured by electronic locking devices (ELDs), which have been required since December 2017. Failing to abide by the rules can result in the truck or having to stop driving for a day or more.

Many point out that these regulations allowing truckers to drive up to 11 hours a day are already extremely flexible, and are resulting in a number of truck accidents in today. In 2017 alone, there were almost 5,000 large trucks involved in fatal crashes, where 60 involved truckers that were described as a fatigued or asleep (although this type of impairment is likely underreported). Indeed, the National Traffic Safety Board has declared fatigue to be a serious problem in all forms of transportation: According to one study conducted more than a decade ago, 13 percent of truck drivers involved in crashes that resulted in injuries or fatalities were fatigued at the time that the accident occurred.

What Would 17-Hour Work Windows Do to Our Roads?

Trucking interests have reportedly been pressuring the administration since last year for these significant changes. In particular, many have been frustrated with the 30-minute break requirement and would like to change the number of hours stopped requirement from 10 to three. However, safety advocates are concerned that this would result in a 17-hour work window and a lack of guarantee that truckers would rest during a three hour stop. They argue that, instead, the administration should be pushing forward with additional safety technologies such as those that regulate truck speed.

The proposed revisions are currently being reviewed by the Office of Management and Budget.

Texas already sees the highest amount of trucking traffic and an alarming number of 18-wheeler accidents. This proposal will only make things more dangerous in terms of serious personal injury and wrongful death out on the road.

If you or a loved one has suffered in a truck accident, contact our Houston truck accident attorneys at The West Law Office today to find out how we can help.

By The West Law Office | Posted on August 21, 2019
« New Research Shows That Pedestrian & Cyclist Deaths Due to Car Accidents Are On the Rise
Who Is Liable for Boat Accidents in Texas? »